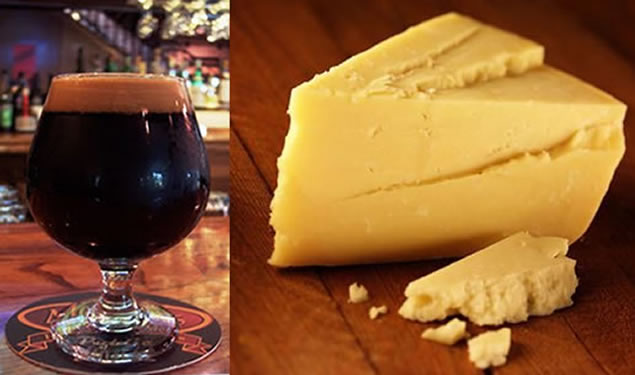 “Where are we going?”

Get ready for some great craft beer and great food, too! Food and beer have always complimented each other. But now – they’re even better together than ever.

Well, with today’s incredible selection of craft beers, plus the increasing interest in great foods – it”s our time! I can almost taste the craft beer food pairings of a superb appetizer of Scallops Supreme in Alfredo Sauce, with the mid-light & flavorful craft beer…

…and enjoying it all the way through desert. We’ll have our palates swelling with robust, luscious, delectable taste. Mmmm!

Let’s use 5 oz. tasting glasses so we have have room for all the courses of goodness.

5 oz. pint-shaped glasses will work for all beer tasting that you do. But if you want to experience the individual brews even better – with fuller taste and visuals – then, as you are able, add to your tasting glass collection. You can get Tulip, Wheat or Hefeweizen, and Pilsner 5 oz. tasting glasses.

1. Start Your Engines with Witbier & Mascarpone

Start your engines with a soft, white fresh Mascarpone cream cheese. Mascarpone is an almost creamy, curd-like cheese from the Lombardy region of Italy, and is a byproduct of the making of Parmesan cheese. Spread your Mascarpone on mildly flavored crackers for a sumptuous treat.

Serve with a 5 oz. glass of Witbier in a Wheat-style tasting glass at 40° – 45°F.  Witbier is a barley/wheat beer originally brewed in Belgium and the Netherlands. It gets its name due to suspended yeast and wheat proteins which cause the beer to look hazy, or white. It is a descendant of medieval beers, flavored with coriander, orange, bitter orange, and hops.

Savor the flavors, pausing briefly after each course to enjoy the aftertaste before going on to the next taste treat.

With this, we’ll have a 5 oz. Wheat glass of Blond Ale or Kölsch at about 40° – 45°F.  Originally brewed in Cologne, Germany, Kölsch is a clear beer with a bright straw-yellow hue, and a prominent, but not extreme, hoppiness. Kölsch’s popularity has risen in the United States to the point that several microbreweries in the US are now making Kölsch.

Now, many people believe that wine and cheese go together, and they do. Beer, though, has a secret ingredient that “still wine” lacks – effervescence. The carbonating bubbles act to softly cleanse the palate and tongue – preparing your taste buds for the next taste pop.

Our next stop on this flight pairs Aged Gouda cheese, a true “Dutch Treat” which is unrivaled for its perfect balance of salty and sweet. It’s deep caramel in color, crunchy, flaky, and meltingly smooth on the tongue, with a hint of butterscotch at the finish. Again, just slice it thinly and forget the crackers.

Serve with Brown Ale or Altbier in a 5 oz. pint-shaped tasting glass at about 50° – 55°F. “Altbier”, meaning “old beer” in German, is conditioned for longer than normal periods of time. The extended conditioning mellows out the ale’s fruitiness and produces an exceptionally smooth, crisp, and delicate brew.

4. Tour of Italy and India

Last stop before a short break: Small cubes of Gorgonzola paired with your favorite IPA.Gorgonzola is a veined Italian blue cheese. It can be buttery or firm, crumbly and very salty, with a “bite” from its blue veining.  It has reportedly been produced in Gorgonzola, Italy, in the Lombardy region since AD 879. If you get young Gorgonzola, you may need those mildly flavored crackers to spread it and enjoy. With older Gorgonzola, just cut or break it into small chunks to enjoy.

Serve the IPA in a 5 oz. size pint-shaped tasting glass at about 50° – 55°F. IPA, or India Pale Ale, descends from the earliest pale ales of the 17th century, when the British worked to develop a beer that would survive the lengthy and rugged trip to its colonies in India.  It is highly hopped and high in alcohol, with a strong hops aroma, flavor, and bitterness.

Let’s stretch our legs just a little before the next course. Move about the “cabin” and tell all of us about the delicious and interesting tastes that you’ve just experienced.

Tell us about the taste similarities between the cheeses and the craft beers – are the relative flavor strengths a good match? Does the carbonation enhance your tasting experience? Good! Shall we continue on?

5. Our penultimate tasting for this flight… and then… dessert!

Thinly sliced, long-aged Sharp Cheddar, paired with either a Dry Stout or Imperial Stout. Cheddar is a relatively sharp-tasting cheese, originally produced in the English village of Cheddar in Somerset.

Serve either a Dry Stout or Imperial Stout in a 5oz. tulip, snifter, or pint-shaped tasting glass at 50° – 55°F. Imperial Stout, also known as “Russian Imperial Stout”, is a strong dark beer or stout in the style that was brewed in the 18th century in London, England, for export to the court of Catherine II of Russia. Irish Stout, “black beer”, is very dark or rich in color and often has a “toast” or coffee-like taste.

When tasting the cheeses, make sure and let the cheese “melt” in your mouth so all the flavor and texture are discovered.

Time to land, so, it’s time for dessert! Your choices today are German Chocolate Cake, or Tarte Tatin (caramelized apple tart). I will have the Tarte Tatin, please. Or, maybe – both? No? Ok, if you insist.

I suggest a full serving size for whichever dessert you choose. Yup – full ones. Hmm… just between us, dessert is always my Achilles Heel.

For our dessert beer we will have either Weizenbock or Doppelbock. The Bock style beers are fermented with special yeast that gives the brew a slightly spicy, clove-like flavor. Serve in a Tulip or Pint-shaped tasting glass.

For this last course, you certainly have my permission to refill the glass as often as you wish.

Along with our crew, I want to thank you for flying with Black Bucket Brew on our first Craft Beer & Food Pairing flight! We hope that your flight was enjoyable and look forward to spending more time with you on future flights!