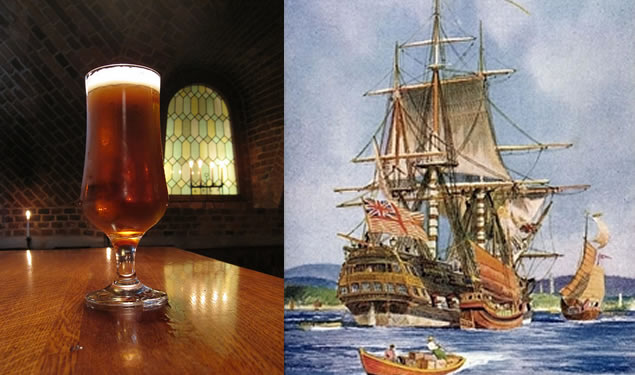 How did IPA Ale originate, and what is it? IPA was born in England, and India was its midwife, so to speak. In the 17th century, England colonized India and stationed military and other English citizens there. Military men were accustomed to drinking 1 gallon of ale a day and expected the same when stationed abroad.

That was a big problem for British Ale in India. The shipping from England took up to 5 months, subjecting ale to hot and rough weather, plus nasty, heavy rolling seas – conditions that ruined the freshness of any beer of that time. A new beer style, IPA – India Pale Ale – was created, so that it could make the journey unspoiled.

Yes, it’s true. We’re in debt. Craft beer lovers owe a debt to England and its colonization of India for giving us the most popular craft beer in the USA – the IPA- India Pale Ale.

“How did this debt start? And, uh, how much is the interest rate?”

I’d rate the interest Very High. Every craft beer brewer has at least one IPA – or they should. 😉

The Porters, Stouts, Ambers, and Pale Ales of the day did not travel or last well in hot climates. The trip by wooden sailing ships from England to India was up to 5 months long, and it got hot – very hot – and even hotter once they were in India.

Unfortunately, their beer was stale or sour after being pitched and rolled in a ship, and subjected to wide temperature variations for up to 5 months. You’d be stale and sour, too, under those conditions!

“Hop up the stuff”, someone said. “Juice up the alcohol”, said another. And they did.

The three types of IPA:

English – has more malt and less hop aroma or taste in its flavor profile. If you aren’t sure an IPA is for you – this is a good place to start. It has less bitterness.

American – is hop-forward in its flavor with an intense aroma of hops. Generally citrusy and has more bitterness than English IPA.

Imperial or Double – American on Steroids. You know Americans like to make everything as big and bold as can be – this is it – Bold! Extreme bitterness, intense hop flavor and mega aroma!

Let’s Go to the Hops

Lotsa Hops – The Key To A Great IPA!

Say, hey – what about the food? Which foods should I have with my IPA?

Experimentation may be dangerous in a chemistry lab – but not in your home brew pub. Use the guide below for your IPA pairing takeoff.

And What Foods Go Best With IPA?