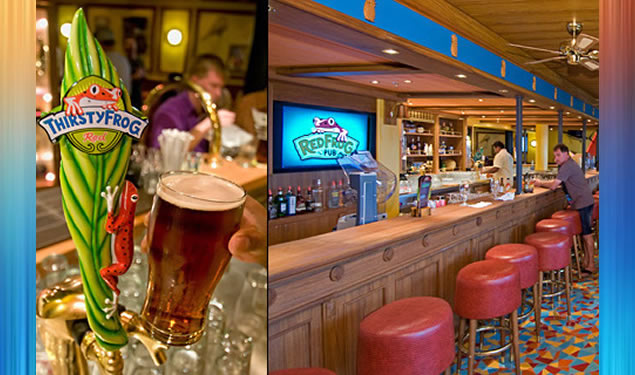 What’s a Thirsty Red Frog doing on a cruise ship?”

Well, frogs are amphibians; they swim and hop along on land, and they need a drink once in a while, so… Let’s see what’s up.

It seems that by crossing an Irish pub with a Caribbean beach bar, that a freak of genetics produces a – RedFrog Pub. And so that the frog can get its drink, the pub serves ThirstyFrog Red.  Red Frog Beer’s draft beer is Carnival Cruise’s answer to the craft beer revolution. 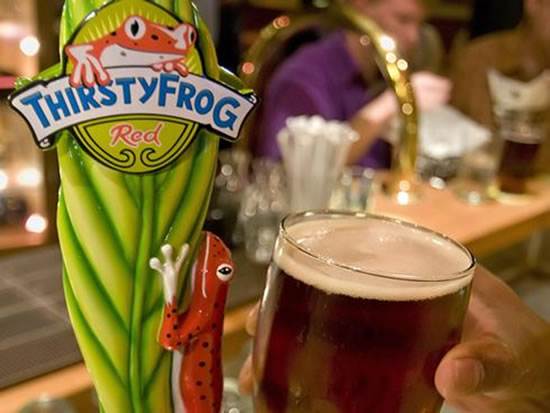 This pub also has Firecracker Jamaican Chicken Wings. Not sure what genetic cross that is, but it does sound like it would be a good treat with a really great IPA.

The cruise line introduced the new themed pub last year and its private label beer hasn’t, and probably won’t, reach the mainland USA – since it’s served on a ship.

They need some reviews of Red Frog Beer.  Hey, maybe Carnival will send me two free tickets to test their new…

…Never mind – that’s a fantasy. Hold it – isn’t “Fantasy” one of their ships? There could be hope yet! 😉

Carnival CEO was quoted as saying that on its at-sea debut, ThirstyFrog Red was “even more popular than we expected.” Departing from Venice, Italy, on the debut cruise last year, the ship ran out of ThirstyFrog Red – the Red Frog Beer – before it reached its first port.

So, if you’ll be cruisin’, and you wish to review TastyFrog Red, here’s what you do:

Red Frog Beer is just one of many entertaining and informative articles in Black Bucket Brew – the free beer e-Zine. Subscribe Now for your free emailed copy!